Add an article with images and embed videos.

Upload a video or embed video from Youtube or Vimeo.

Upload your audios and create your playlist.

Election Day 2021 in Bronx - The Winners and Losers

In an eight to one Democratic city that would mean that Democratic candidates should receive at least eighty percent of the vote in the General Election. That held true for all but one Bronx City Council race. The 13th City Council District, with the 82nd Assembly District being the last strength of the Bronx Republican Party. The early results show a poorer showing than four years ago, but the absentee ballots should go for the Democratic candidate, and increase her margin of victory.

In the race for Citywide offices only City Comptroller elect Brad Lander broke the seventy percent level. From day one Mayor elect Eric Adams will have to win over those who voted for one of his many opponents or did not vote. Mayor Adams will have to be a mayor for all the people as he said, and not like previous Mayor Bill de Blasio, or it will be a long hard four years, as it has been under Mayor de Blasio after he won re-election. Could this less than average showing by Public Advocate Jumaane Williams show that he is not ready to run for Governor of New York State?

As we congratulate the new Bronx elected officials, we were at Bronx Borough President Elect Vanessa Gibson's victory party. Just like we saw at the Adams victory speech later, we were wondering where the Bronx Democratic Party officials were. Had they all gone down to SOMOS in Puerto Rico like we were told that Assemblywoman Nathalia Fernandez had done, to party, or were they sending Bronx Borough President Elect Gibson a message. At least Assemblyman Jose Rivera was there with his video camera to document that.

Bronx Borough President Elect Vanessa Gibson looked around the room to see who was there. 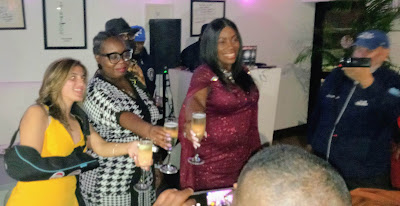 Bronx District Attorney Darcel Clark was on hand to celebrate Borough President Elect Gibson, and the many city council members on hand, victories.

Former Councilman and advisor to the current Bronx Borough President was in the House.

Assemblyman Jose Rivera always has a shoulder to put a head on.

A view of the standing room only crowd at the victory celebration of Bronx Borough President Elect Vanessa Gibson. The action is at the back of the room where it was like being on a rush hour subway pre pandemic.

Get Ready for the Unexpected with a Disaster Go Bag

Two People Shot in the Bronx. Shooter on the Loose

Poll By Data for Progress Shows Ruben Diaz Sr. in the Lead...

Deportations in NYC have soared 150% as a result of racist, xenophobic Trump policies

Tanzania’s Big Five: Why Tanzania is an African Leader...

Tanzania is moving to ensure the connectivity and infrastructure is in place to...

The Embassy of Ireland’s Grant to Trademark East Africa

The Killing and Public Dragging of Anglophones in the Francophone...

Center for Human Rights and Democracy in Africa (CHRDA) condemns the killing and...

The Office for New Americans

Smaller African Nations Should not Fear but Embrace African...

Because of the latest Nursing Homes death counting (miscounting) and the sexual harassment allegations against Governor Cuomo, some are calling for his resignation prior to the completion of the ongoing investigations for the aforementioned. Do you think the governor should resign now?

No. We have to wait until the investigations complete and the findings are impeachable.
27.8 %
No. Not until the due process is exhausted and he is found to be impeachable.
16.7 %
No. No impeachment period. Let him finish this term and let the voters decide his political fate.
41.7 %
Yes. He should resign now. he can no longer be an effective governor.
5.6 %
Yes. He should resign now because he lost the confidence of the public.
2.8 %
Yes. There are too many allegations against him.
5.6 %
I have no opinion on this matter.
0 %

Federal Drug Administration (FDA) recently approved Pfizer's COVID-19 vaccine for emergency use. Would you take the vaccine when offered to you?

Women who observed public modesty, Muslim women in particular, have been left out by public physical fitness settings. The fitness places aren’t designed to help them maintain their privacy, modest dressing and single gender interactions. Yet, like men, many of the health-related issues these women deal with can be minimized by regular physical activities, as physical fitness enhances the quality of life for both sexes. For example, Aisha, the wife of Prophet Muhammad once said, “I raced with the Prophet (PBUH) and beat him in the race. Later, when I had put on some weight, we raced again and he won.” So, if there were physical fitness centers/gyms designed to accommodate the privacy need of women who observe public modesty, would you be more willing to use them or for husbands, would you be more willing to encourage your wives/daughters to use them?

Congresswoman Alexandria Ocasio-Cortez who represents Congressional District 14th has gained national and international media publicity for not only defeating a formidable opponent but also for her aggressive push of progressive agenda in Congress. Yet some of her Bronx constituents have complaint about her lack of Congressional Office in the Bronx, among others. Do you think she deserved to be primaried by the Democratic Counties Committees in Queens and the Bronx?

As you may be aware, two sitting United States Congress Members who had planned to visit Palestine/Israel were refused entry by the Israeli Government for their support of Boycott, Divestment, and Sanction (BDS) of Israel's Occupied Palestinian Territories. Do you agree with Israeli Government's decision barring them from entering Israel?

Yes. Israel should refuse entry to anyone who supports BDS
33.9 %
No. Regardless of their positions, as members of Congress, they must be allowed to visit Israel like all others members.
30.6 %
Yes. because their trip was for a propaganda purpose only.
12.9 %
No. They have the right to visit places of their preferences and meet whomever they need to meet while they are there.
16.1 %
I don't care about this issue at all. It doesn't concern me.
6.5 %

There has been heightened war rhetoric between the United States and Iran lately. Do you support US war with Iran?

According to Attorney General Barr, Mueller Report exonerates President Trump of Collusion with Russia and Obstruction of Justice. Do you agree with the outcome of Mueller Report?

Yes. I don't think the president colluded with Russia or obstructed justice.
33.3 %
I support the report's position on collusion, but I still think there is obstruction of justice
10.6 %
No. I think there were collusion and obstruction.
39.4 %
No. I think democrats should proceed with more investigations.
6.1 %
It does not matter anymore. Congress must move on to other issues.
10.6 %
I did not follow this issue and do not care one way or another.
0 %

There are over 50,000 students on waiting list for Charter School seats and the city has recently maxed its Charter School limit. Do you support removing or raising the Charter Schools cap so that these and other students can attend Charters Schools?

TODAY, February 12th, Council Member Jimmy Van Bramer was joined by members of the NYC Council LGBT and Progressive Caucuses, members of the LGBTQ community, and progressive groups to denounce homophobia and to reiterate calls for Council Member Ruben Diaz Sr. to resign. “Council Member Ruben Diaz Sr. must resign. I do not want an apology. We are past time for apologies. Words have consequences. And Council Member Diaz’s words happen to be part of a long history of homophobia and disgusting attacks on the LGBTQ community. The NYC Council cannot tolerate elected officials who use their power and authority to demonize, hurt, and incite violence against marginalized people,” said Council Member Jimmy Van Bramer. “I am proud to have led this effort because I have an obligation as a gay man to speak up for my community and to protect and save the lives of LGBTQ youth. I call on Council Member Diaz to resign, not because I want to stifle his free speech or religious beliefs, but because I know all too well how homophobic smears like this are detrimental to the health and wellbeing of LGBTQ youth. Our community has been fighting for a seat at the table for generations. Now that we have rightly claimed our seats at the table, it is time to close the door on bigotry and hate once and for all.” *** Based on the LGBTQ Caucus of New York City Council's call for the resignation of Councilman, Reverend Ruben Diaz Sr, do you agree for Diaz to resign?

What would you change to make the most significant positive impact on the quality of live in Parkchester?

I would offer tax incentives for health food stores like Wholefoods to move to the area (preferably the 365 economy chain).
13.3 %
I would take steps to improve security in Parkchester.
14.7 %
I would offer more senior services, and host year-round events in the Oval.
2.7 %
I would offer resources to entrepreneurs and would-be entrepreneurs in Parkchester.
12 %
I would open a multiservice community center with services for children (tutoring, counseling, etc.) and adults (resume writing assistance, legal services, letter writing assistance, health seminars, skill building courses, etc.).
57.3 %